A downloadable game for Windows

The demo here is really old, a new one will be out SOME time.

INSTALL THIS DIRECTX THING IF IT CRASHES WITH SOMETHING LIKE:

Yeah still working, we've made a lot of changes, and its kinda crazy how old this demo we have on here is lol.

And for sure you can email us dude! sent ;))

So is new version still in plans? Waiting for two years already. ^_^

yep! hopefully within a month even. thanks for the wait too, thats so nice to hear!

In fact dude I can just send you a current (debug enabled ;) build since you've been waiting so long.

Oh that will be nice. By coincidence I have a couple of days for games at last.

Cool! So we made a lil Discord, join it here: https://discord.gg/qtGFnnU

Favorite game I've found on here for sure is it still going?

Yeh new demo soon(TM), gonna try and post this around the inter-zones when it comes out.

Hey man we made a Discord for Legacy Code recently, we're gonna distribute builds to fans before we do the legit demo. Check it here: https://discord.gg/qtGFnnU

Is there any way to disable the blood? it causes my game to run slowly. Thanks!

No way to disable the blood as is, but it is def unoptimized. I'll throw in an option for it though. And yeah i'm a year late on this reply lol :)))

I have to agree with markthewolf, though.

Thanks for the feedback!

Not a bad prototype. Nice pause/inventory screen. Could use particle systems for better effects and shaders for shadows.

There is a drastic difference between fluidity and floating about like a dirrigible.

Had to google dirrigible, but yeah the movement is pretty icy in the most recent build, we've upped the friction on a bunch of things to make it feel more grounded.

Thanks for the feedback!

I have to hand it to you, I actually love the look of your game. Really keen on the menu too. Tutorial's wonderful, but you need to put in something to warn the player of fall damage as it was not a pleasant surprise when I found out as I played through the game. You're able to hit enemies/barrels/items through walls, is this intended? Drones seem to drop nothing despite being spawned infinitely from above and that's a bit disappointing. Movement's pretty great, although I feel like you're constantly on sliding on ice with how much you tend to slide before stopping.

There are some issues like the hidden objects I'm currently standing on. Nothing else that I've noticed unless you count drones getting randomly hit by frogs/chameleons/wolves. Drones also seem too weak given all it takes is a single wall to 'outsmart' them, maybe some directions for them to check one by one around corners or even use the actual ricochet mechanic that is in-game and have them shoot at an angle to hit the player behind a wall/obstacle. I'm guessing levels are randomly generated too so you might want to look into that given the amount of invisible objects that spawn and if you're going to tell a story with your game, don't use it at all and handcraft levels yourself. Best of luck.

Hey thanks dude, glad you enjoyed it! This is some good feedback!

Hitting things through walls is a bug. Drones are definitely getting an improvement pass. We're gonna try to do a pretty light story. Movement is more friction-y now. We fixed all the invisible platform things.

Thanks again for the feedback!!!

Oh yeah, you also get multiple keys even after reaching 5/5 required. Think that's it.

I think I saw this before somewhere so get this.

Wow. Goog prototype indeed. I think this can become a really great game. 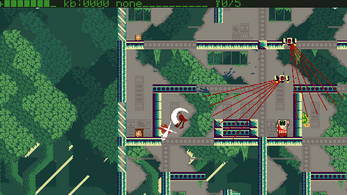 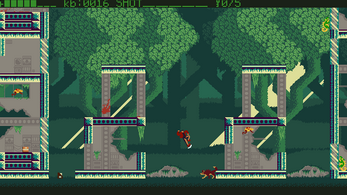 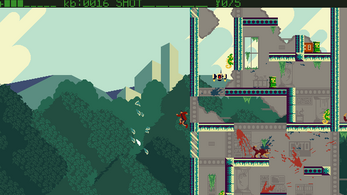 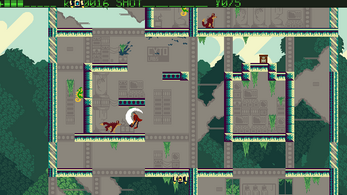